Sense of Fear – As the Ages Passing By… (Rockshots Records) 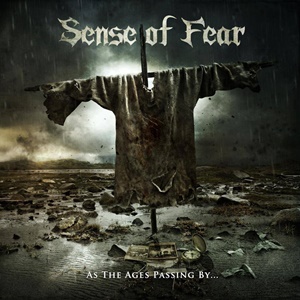 Originally known as Holy Prophecy in their late 90’s stages, Sense of Fear are not spring chickens when it comes to seasoning and experience. Although As the Ages Passing By… is their first full-length, they’ve had a couple of prolonged periods of inactivity due to lineup changes and general life situations – so it’s great that after twenty years, they finally pool all that creativity and songwriting nuances into these ten tracks of heavy metal with power and thrash inflections. The question weighing on this scribe’s mind though is – will the wait measure up?

The quintet tends to favor basic riffing as a springboard for mutating into those flashy power/thrash sections that can provide fluid, flashy moments – where you may get a Teutonic/NWOBHM flavor and then hear some American finesse angst or Morgana Lefay/Grip Inc. diversity as a bonus. Their name sake track “Sense of Fear” for example possesses a straight-forward Grave Digger/Running Wild guitar and rhythm section staple main passage and chorus, only to turn on a dime into this slower, clean/emotive lead break before returning to the locked and loaded Teutonic swing and gallop of the beginning. Distant snare hits and building guitar momentum gives chase to propulsive double bass and a crunchy Nevermore/Pantera-ish texture to lead off cut “Molten Core” – vocalist Ilias Kytidis slithering through the verses in various metal or semi-lower melodic voices before the gang-oriented chorus (think “Ram It Down” from Judas Priest) hammers things home. Over the course of the ten tracks you get a mix of epic arrangements and quicker numbers (check out “Lord of the World” for some of their heavy/thrash crunch in under three minutes), which aids the record in not staying stagnant in one specific blueprint for structure.

Conversely, as great as some of the music and diversity is, you can’t help but feel that the band instinctively go for many cliché riffs and gallops that scream ‘heard it before’ or done better by veterans like Manowar, Virgin Steele, and Iron Maiden. There are numerous guitar parts in “Angel of Steel” that 80’s Maiden followers will easily pick apart, and the subsequent ballad “The Song of a Nightingale” features killer acoustic/clean guitar work but a very awkward verse to chorus performance from Ilias, several leagues below Eric Adams and David DeFeis, two obvious influences in his repertoire. Sense of Fear probably feel relieved to finally get this full-length to the public – hopefully on the next go around, there will be an even more cohesive idea of approach to get those diverse influences into a sharper attack.