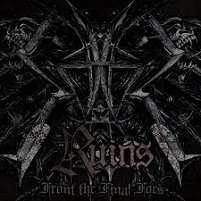 A bit taken aback as to how modern and ready to strike Front the Final Foes is. This, coming from a little-known duo from Tasmania, of all places. Ruins are more or less a less thrashy, more Euro version of Goatwhore, but with morecompact

songs and less vocals. There is also black metal angle, which touches upon vintage Celtic Frost and it shines throughout this wholly enjoyable eight-song offering.

In relation to the quip as to how modern Front the Final Foes is, it mostly boils down to the production, which is crystalline without being too pristine. There is a heightened sense of clarity coming off of this thing and you typically don’t get such a treatment from band’s of this (for the time being) low stature.

What it does is bring out the nastiness in songs

like “The Sum of Your Loss,” which opens with a absolutely bull-dozing first riff. Latter-day Satyricon is evoked during “Annihilate,” while the title track rolls off a handful of memorable, face-fucking riffs, most notably at the 00:20 mark. Above all else, these songs are lean, created with a distinct sense of precision that shows a promise of better things to come.

Consider us on board for this album and band. A highly memorable, well-executed, cut-throat, take-no-prisoners album, Front the Final Foes should be the foot-in-the-door for Ruins, a band to watch for 2010.