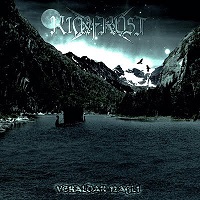 No one exploits the thrash angle in black metal like they really should. Sure, there are some true black/thrashers (Auro Noir is always the first band to come to mind) and just about every BM band touches thrash, but folks, the real deal

is Rimfrost. Branded as Scandinavian black metal, the band wisely interjects a load of angular, oftentimes memorable riffing into the excellent Veraldar Nagli.

What keeps this in the thrash realm are the riffs, and they’re everywhere on the opening title track. After this barrage of nimble guitar-action, matters segue into a forlorn atmospheric section (at the 4:25) which sets the rest of the album up perfectly. Death-dealers like “The Black Death,” “The Raventhrone” (the first two riffs are veritable monsters), the atmospheric (think Immortal) “Legacy Through Blood” and climatic “Void of Time” are all top-notch numbers, indicative of a band who has been through the songwriting wringer and back.

Bolstered by a crisp production job, Veraldar Nagli gives Rimfrost plenty of breathing room to operate. And it’s easy to fall in line with the surging “Mountains of Mana” (which does have some very blatant Immortal angles) and “I Stand My Ground.” There’s just a lot to go around and a lot to be had.

Not a dud track in the bunch, Veralder Nagli should heighten the expectations of a band who is only on their second release. Very much recommended for the few that tired of the new Immortal or who just flat-out get overwrought with the current state of black metal. This is invigorating stuff.