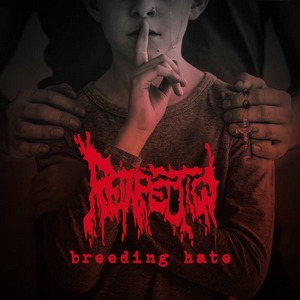 When it comes to over the top and a completely engulfing sense of aggression, sometimes a little brutal death metal is good for whatever ails you in the world. The simplistic and straight-forward kind that doesn’t attempt to do any funny tricks or screw with the status quo, but instead just tears throats from beginning to end without an iota of remorse. That’s exactly what Reinfection do on Breeding Hate.

All sorts of brutal and extreme – find every single clichéd verb used to describe the most frantic of death metal and apply it here. Despite the fact that this is the first piece of music from the Polish act in 12 years, it’s nothing short of crushing even if it does wade waist-deep in some of the genres shortcomings as well. With 9-songs in 27-minutes, there’s ever a need to jump off of the gas pedal, and Reinfection really don’t ever try. But it’s practically feral in tone because of it. The riffing is thick, perhaps even too much so, with each track more or less following the same basic patterns, it becomes a blur after only a few tracks. The same goes for the ‘way up in the mix’ drums, whose blasting is riddled with violence, and the vocals, which are even further pushed up into the mix and are an ever-present source of anger (even if they are ‘the usual’ variety). But again, there’s a certain level of charm to the music, and there’s just enough groove to get your body going, that you can’t help but enjoy a release like this, at least as someone who has been following this stuff for over two decades.

So it may not end up on a bunch of top 10 lists at the end of the year, Reinfection are doing something that’s primal in spirit and utterly relentless. Brutal death/grind though and through, for all its merits and faults, the sense of purity is there. And for that, the extreme underground will get some mileage out of Breeding Hate with a smile on their faces.