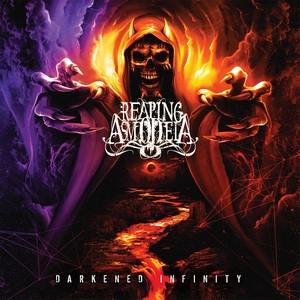 Modern death metal act Reaping Asmodeia have been able to design a version of extremity that doesn’t fall too far out of the box, yet successfully avoids being pigeonholed into one of our many categories at the same time.  Tons of melody, intricate playing, thrashy and groovy bits, and plenty of aggression at the core.  Darkened Infinity is their fourth album at this point, and while it still sticks to its guns, it’s far too playful and energetic to be held down because of it.

Moments of crushing brutality meet more frantic speed runs and melodic bouts over the course of the tracks present.  Much like the best of this particular genre, there’s a bit of detail given to how the songs hit overall.  There’s no portion of the band’s mixture that is just there for window dressing or to check off a particular box.  They are doing their thing, and the bits and pieces end up culminating in a series of strong tracks that have some actual identity to them.  A sprawling cut like “Dreamcaster” successfully weaves in some great epic, melodic moments at times into a frantic, driving track that feels frenetic with energy.  A bit of groove at the end only sweetens the pot that much more.  “False Awakening” has all of the drive and urgency that death metal requires, but when laced with some strong leadwork and tech-y riff moments, it finds its own groove in something that is ear-pleasing while still keeping aggression at the forefront.  More melodic and progressive number “Switching Shadows” takes some time to get its feet off the ground into more bludgeoning territory, but that too gives it a nice juxtaposition to the memorable guitarwork that sits around it.

Darkened Infinity takes much from the diversity of the current death metal scene and runs with it.  Reaping Asmodeia easily fit into the category, but avoid it’s clichés by providing strong mixes of things that we have grown accustomed to while giving it a fresh paint job to enjoy. 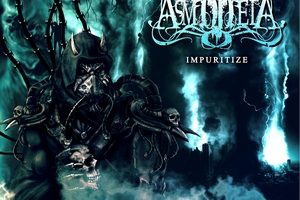