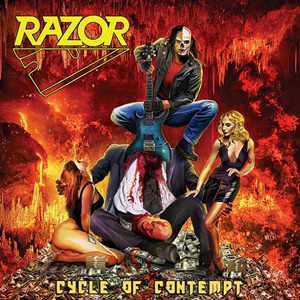 Canadian speed thrashers Razor released an onslaught of material during their first run in the 1980’s to early 90’s – seven albums plus an EP to be exact between 1984-1991. Since that time, the band has been laying low in terms of new material outside of the Decibels album in 1997 – focusing on the occasional live show/festival appearance as guitarist Dave Carlo felt no one wanted new music from this cult act. Putting ideas down since March of 2018, we finally get the ninth studio album for Cycle of Contempt, featuring co-founder/ bassist Mike Campagnolo, vocalist Bob Reid, and latest drummer Rider Johnson – and its as if Razor has not lost any sense of identity when it comes to their relentless, pounding execution that aims to obliterate all senses through its power, passion, and penetrating atmosphere.

What tends to be mandatory for the modus operandi of the quartet is a rapid-fire vocal approach from Bob, surrounded by the key gang-oriented moments to punctuate the main choruses/phrases, plus the jackhammer riffing/bass support and heads down snare/cymbal speed slam with quick fill bursts to keep the energy-level at peak levels. When choosing to slow things down to a mid-tempo pacing for the front half of “First Rate Hate”, the accelerated tempo change around the 2:49 mark gathers that much more locomotive impact, Bob’s sadistic vocal barking matching the fierce Carlo picking and tight stop/start mechanics from the precise rhythm section work. Many will also enjoy the back-and-forth crunchy guitar/bass interplay during the early parts of the title track – showcasing a bit more of a traditional/bluesy aspect to these gentlemen before fading into the expected gallops/charge the subsequent musical movements unleash. While other bands vary the template record to record, Razor prefer the reliable method of keeping things at a speedy, thrash base – lyrical topics regarding mental health / violence for “Off My Meds”, tough guy breakdowns during “Jabroni” all the way to nuclear radiation concerns with “Darkness Falls”.

There is a sense of monotonous, repetitive motions in specific choruses that could be viewed as effective to some while possibly annoying to others (‘he’s king shit’ during “King Shit” the clearest example) – but Razor with Cycle of Contempt prove why rock the boat when the formula works so well? Glad to see that the band’s resurgence thanks to the internet plus re-releases allowed another set of new material to finally hit the streets – those who want more of the same, reliable Razor songs will enjoy this immensely. 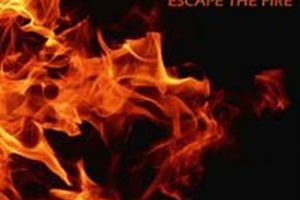