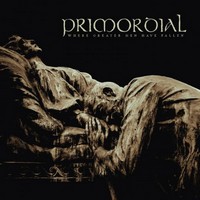 The pride of Irish metal, Primordial, the Dublin black metal doomsters release their eighth album since their debut in 1995, with Where Greater Men Have Fallen.

Kicking things off in strong fashion with one of the best tracks, the title track of the album is quintessential Primordial – epic, gloomy and battle-ready. A fine start, especially in a time where so many bands don’t lead off with the goods for whatever reason. Many an album crosses this desk where things don’t get going until a couple tracks in…a disturbing trend that this album isn’t plagued by. The strong vocals of A. A. Nemtheanga paint the bleak portrait of hard-earned liberty and death in the delivery that is his own. To be sure, his vocals are one of the defining attributes of the band, anyone familiar with Primordial knows this. His clear vocal style, impassioned, strained-throat yelling in gloomy melodies, boiling over into the occasional growl, is unmistakable.

Aside from the vocals, Primordial specialize in melody. Certainly a band tied to the black metal genre, the product isn’t so much of that. Guitar chords strum out overdriven notes that evoke the cloudy skies over an Irish battle field. Bass lines weave the chords and the lead lines together, using tasteful bass distortion and hammering out melodic lines of its own. Generally slow in tempo is the way Primordial rolls, but deep in texture. Exceptions include “The Seed of Tyrants” which finds frenzied blasting underneath huge, airy tremolo guitar, a fast beat in nature, still maintaining a slower feel to the song thanks to the vocals.

Where Greater Men Have Fallen is a hulking, dark beast of a record that fans of the band will enjoy. Being as popular as they are, excitement and expectations are high for a band having a string of successful, well-received albums in their catalog. While not every tune on this one is a home run, there’s nothing foul either. With a strong start, a generally very good middle and maybe the best track “Wield Lightning to Split the Sun” closing things down, Primordial can tally yet another victory.