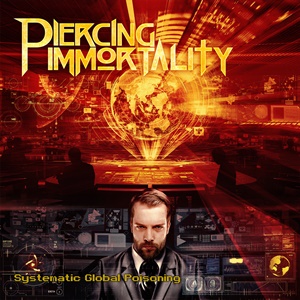 Originally emerging as a solo project for guitarist Keith Pearson during the spring of 2016, Piercing Immortality has developed into a full-on group consisting of dedicated musicians across the Connecticut hard rock/ metal spectrum. Systematic Global Poisoning is the debut release, a quick hitting EP that within three songs encompasses a wide swath of traditional heavy metal, thrash, and hard rock nuances that straddle the classic 80’s style while also taking into consideration the punch of modern metal production and tones.

The galloping nature and circular guitar accents for “No Remembrance” revolve around everything from Randy Rhoads-like Ozzy and Primal Fear to Mercyful Fate – while vocally Scott Anarchy belts out those mid-range to higher melodies as a seasoned veteran, conjuring up everything from Geoff Tate to Jeff Scott Soto with the breadth and warmth to his delivery. 90’s era Black Sabbath with Tony Martin and Megadeth come to the forefront on the follow-up “Open the Flames”, featuring an understated but very melodic lead break while the rhythm section work pushes and pulls between conventional hard rock and traditional/power metal maneuvers. The concluding track “To the Grave” features a propulsive double bass/shuffling drum tempo from John Gagne, riffing that is a bit more aggressive into Keith’s extreme influences (think Carcass and Death in spots), while Scott stretches out a bit with his melodies into aggressive overtones that complement the ferocious, driving nature to the arrangement.

Properly seeking out Toxic Holocaust’s Nick Bellmore for production, recording and mixing duties plus Zeuss on the mastering side ensures Piercing Immortality possesses the right forcefulness to capture attention alongside the current crop of metal bands. At thirteen minutes and change, Systematic Global Poisoning should give the band a decent platform to build upon, as the quality musicianship and songwriting stand up well for those who love classic heavy metal with a bit more dynamic finesse and killer vocal melodies.