Pentacle – The Fifth Moon…Beyond and Back (Vic Records) 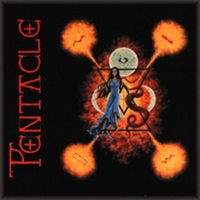 A relative unknown on these shores due to their uber-cult status, the Netherlands’ Pentacle can be considered one of its country’s first extreme metal bands. Some of the band’s members have enjoyed stints in bigger, more recognizable outfits like Asphyx, Luciferon, and Soulburn, but that’s neither here nor there, for The Fifth Moon…Beyond and Back does more than a serviceable job of culling Pentacle’s various demos, EPs, etc. into an 18-song set that serves as a nice little jaunt through time.

A good chunk of these jams are swiped from the band’s mid-90s era, a time when death metal was struggling and cross-pollination (i.e. merging death and thrash, or thrash and death…you get it) wasn’t the thing to do. Pentacle, though, prove to be more than capable of combining the sinister aspects of Stockholm death metal, with the chunkiness of Floridian death metal, along with the zest and pep of Bay Area thrash. Alas, a Dismember-Death-Exodus combination this is not, for Pentacle’s ability to dip even deeper into the throes of early extreme metal (see: Hellhammer, Venom, et al) bolters roundabout songs like “Black at Heart,” a near-eight minute number with a maze of riffs and dark melodies. Big ‘ole nods to the doom push of “A Dance Beyond,” as well as “A Serpent in Blood Red,” and the raw “Deepness of the Depths.”

DR was only provided with a digital copy of The Fifth Moon…Beyond and Back, but supposedly it’s accompanied by a picture-filled 32-page booklet with liner notes and the like. Such excursions through time (i.e. the 90s) should become more commonplace now that we’re well past the two-decade mark recordings from bands such as Pentacle. Forever on the cult side of things, The Fifth Moon…Beyond and Back shows if anything, just how underrated the band was. And still is.