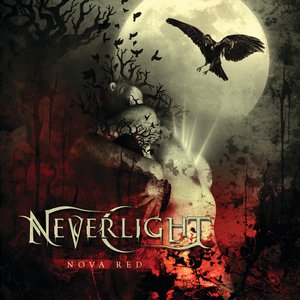 It takes some belief in your band to come up with a description like “Evergrey meets Nightwish meets Maleficent.” Such statements usually lead down the path of heightened expectations (and then disappointment of course). But credit where credit is due, Colorado’s Neverlight not only describe themselves to a tee, but they also manage to craft a sound that meets the potential high expectations from such a description.

With the description nailed down, let’s get right to the nitty-gritty. There’s obviously more to the act than a simple one line bullet point. The music of Nova Red has a flair for the dramatic (and occasionally the gothic) and feels suitably dark. Some bands of this nature have a tendency to hit a more upbeat and cheery feeling, and Neverlight happily avoids this stereotyping with a heavier approach. While it’s orchestral in nature for sure, the gritty guitar sound keeps even the more electronic-sounding tracks (“Red Shift”) from getting too carried away, thus grounding the album. So it veers more towards the Evergrey/Nevermore territory than you might expect, and this allows the material to shine. Progressive riffing structures, complex melodies, and soaring leads all take an equal share of the weight (see “Liar”). Some more melancholic material also infiltrates, as “The Revenant” showcases, and Amanda Farrell’s charismatic vocals – able to hit some high notes but never losing any power or energy. The band’s mission statement is summed up well on the 10-minute title track that finishes things off, which carries an emotive undercurrent mixed with the heavy pummeling that the band has built up over the album.

The band bringing in some established firepower (such as Dirk Verbeuren, Ruben Wijga, and Ray Riendeau) only serves to show how strong a presence they’ve already built. For a sophomore effort, Nova Red feels like the band has already designed a sound that is tailor-made for them. Neverlight should face little issue convincing those on the progressive/symphonic boundary that their cause is just.