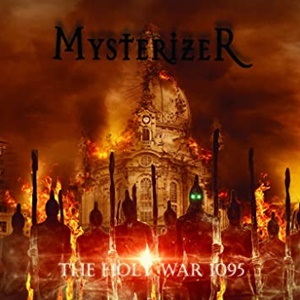 Quickly making an impression with their melodic heavy metal style with Scandinavian flair, Mysterizer aligns with Rockshots Records after an impressive debut album on Inverse Records Invisible Enemy that came out in 2019. Expanding their lineup to a sextet following the recruitment of three new members (welcome bassist Ian Guidestone, drummer Joni Kylätie, and keyboardist Jay Palmroos), we have the sophomore follow-up in The Holy War 1095. The impressive talent and dynamic songwriting abilities shine once again – as the band stride confidently into their traditional heavy metal influences with power and occasional left field twists to ensure a wide bank of tracks to process and consume.

The ten songs don’t follow a conceptual story per se, but the diversity of the lyrics run the gamut from 15th century witch-hunts to Julius Caesar, the dangers and sins of love as well as a COVID-19 track. “Virus-C” contains a large choir-like chorus plus folk/cultural inflections against the metal instrumentation – sure to be a highlight for unison audience singing live. Specific cuts evoke more of an epic, dramatic atmosphere where vocalist Tomi Kurtti can stretch his multi-octave pipes to the limit a la Halford, Dio, and Dickinson. Look into “The Fountain of Immortals” as the key song for some impressive melodies as well as some soothing transitional parts and an emotive lead break with some smart arpeggio accents, while those who love heads down power riffs, thunderous drum fills, and a grand chorus will devour “Alea lacta Est” – a true story where Caesar and his troops cross the Rubicon River waiting to attack Rome. Opening cut “Burn Witch Burn ” has that two-fold guitar/keyboard syncopation hook element down pat, aligning with Yngwie Malmsteen in his more controlled Odyssey or Facing the Animal days. Beyond the conventional mid-tempo and faster outings, you’ll also get the power ballad “Heroes”, while the title track which concludes the record contains runs the spectrum from heads down neoclassical riffs to standard power fare, a little progressive in the instrumental sections before ending in an Iron Maiden-like meets cultural/classical salvo.

The attention to detail in the little things pays dividends to the overall sound and output for Mysterizer on The Holy War 1095. Those who love 80’s-oriented heavy metal with plenty of neoclassical, melodic, and power influences should be very pleased with this offering. 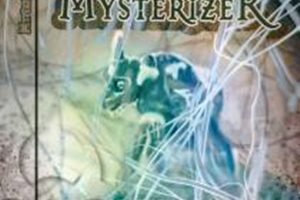