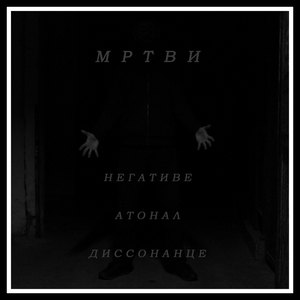 When you begin with a disclaimer about one’s music is “not an album” but a “statement, a philosophy, an experiment,” you can tell it’s going to be a divisive one. Such is the ideology of MRTVI’s second release, which will easily fall under the category of ‘not for everybody.’ Indeed, one’s tolerances will be stretched when listening to Negative Atonal Dissonance, and it’s certainly an original offering. Whether it works or not is in the eye/ear of the beholder.

This is chaotic, creepy, and fairly scatter-brained stuff. At its most metallic (“As Consciousness is Harnessed to Flesh Part 2”), it carries with it a Jute Gyte vibe – dissonant, atonal black metal with terrifying screams, unhinged blastbeats, and riffing that is completely unpredictable and frenzied. It’s unsettling to say the least, and that’s the strong point. It totally achieves its goals of claustrophobic and disturbing the listener out of their comfort zone. But it’s the opening and closing statements around said track that seem to take things too far (and too long). The opening cut (“As Consciousness is Harnessed to Flesh Part 1”) is a slow burner to say the least, with 8-minutes of gradually building sound effects and ambience atop some spoken word sampling that never really gains any sort of traction, nor builds much atmosphere. The closer is more crazed and chaotic, but suffers the same ‘overdoing it’ vibe, with over 20-minutes of swirling and spiraling sounds, shouts, and almost tribal drumming at times. It just kind of drones on, but never really capturing the hypnotic vibe either.

While it’s always nice to hear something a bit outside the comfort zone and an album that’s not afraid to go at its own pace, in the end there’s just no reason to return to an “album” such as this. There’s some potential in there for the quirkiest among us, but the idea of noise for noise’s sake isn’t going to fly for most. What sounds good in theory may not always make for best practice.