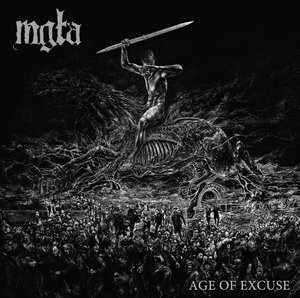 While many across the US (yours truly included) celebrated/embraced a day away from the rat race, a surprise dropped without warning. Mgła, the laser-focused practioners of caustic, melodic black metal, unleashed Age of Excuse unto the world. Much like that world the images and message within Age of Excuse is rarely pretty and is blunt to a fault- why should everything strive for the majestic?

Not to downplay or undersell Age of Excuse as a work. Not at all. I came late to the Mgła part during the Exercises In Futility era, deployed and out to sea for most of 2015. It wasn’t until early on in 2016 and seeing it pop up with fierce regularity on best-of lists that curiosity won out, I strapped myself in, and without much surprise found it fantastic. Age of Excuse carries the same weight.

And ‘same’ here is often literal concerning signature marks of the band: a stark and colourless cover, a handful of songs, 40 some minutes of runtime, each song separate but anonymous- mere pieces of the conceptual whole. It seethes: with fervor, vitriol, and tightly wound observations of the society around us all: one hell bent on destroying itself largely through willful ignorance. Drummer Darkside remains a powerhouse and the band’s key ingredient, dressing pillar black metal item of blast beats in a veritable litany of cymbal accents and flourishes throughout each song. Taken as a whole, the music on Age of Excuse is one of refinement. This is Mgła and you won’t mistake what you hear for anyone else.

To discuss individual tracks would largely run counter to the experience so there will be mostly none of that here. However, though it’s rare I pay much mind to the lyrical content in the music I indulge there is a lyrical passage in closer “Age of Excuse VI” that stands out, both because of how it factors structurally and its content:

Empires get wrecked
Principles get crushed
Saviors get crucified
History gets what?
History fucking gets over it all

That is Age of Excuse. 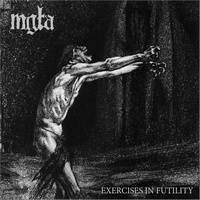