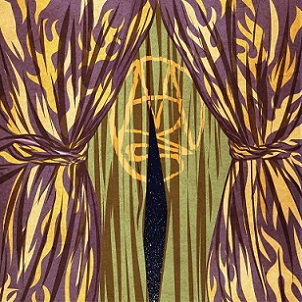 The space-time continuum has a new, ballyhooed navigator in the form of France’s Mars Red Sky. Certifiably stoner, with the proper doom run-throughs, the band has enjoyed quite the productive 2016 starting with the Providence EP, and now with Apex III (Praise for the Burning Sun). Along the way, they’ve generated a nice little following, becoming an everyman band in a time when punters prefer their bands slotted into their own subgenre corridor. Perhaps that’s the most revealing element of Apex III: it just does its thing without giving much thought to classifications.

Mars Red Sky can come across as being somewhat soft sounding, and that lies solely with vocalist Julien Pres. Operating in a similar manner like Three’s Joey Eppard, Pres is the fluffy blanket to the band’s sometimes heavy, but always flowing style. As it would happen with a band whose lyrical outlet is space, there’s a certain degree of spaciousness to the album. You can find it on “Under the Hood” or “The Whinery,” where a regular diet of guitar effects (the wah pedal gets routine airtime) and drum and bass interplay combine to make numbers of the heavy psych rock variety. (Yeah, stoner and psych rock are interchangeable terms. At least in our jaded opinion.)

But it really boils down to how you want to handle Pres, for a standard fare beard dude out front would probably make Mars Red Sky ‘yer average stoned-and-plod type of group. Clearly, that’s not the case on Apex III. And as one of the more unique finds for Listenable Records in recent memory, Mars Red Sky sticks out like a sore thumb on the label’s roster, and the stoner scene as a whole.