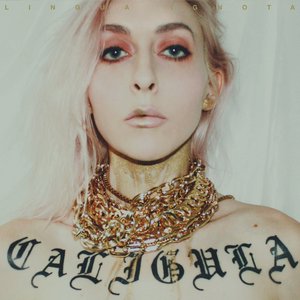 Caligula is a challenge. It’s a challenge to what you, as a listener, are willing to endure. This shouldn’t misrepresent it, there are ample moments of positively haunting beauty across Caligula. Those moments, however, are cast against some of the densest, most unpleasant listening you’re likely to find this year that isn’t a straight up noise record. Prisons, by design, are as much for keeping the world away from whatever imprisoned as they are for keeping the imprisoned contained. Abuse, as an action, is nothing if not the act to imprison – in a place or time. Caligula is born of such an act.

And Caligula is the sound of that prison being annihilated from the inside out.

Genre tags do not apply to Caligula, for while Kristin Hayter’s musical background is in full force through showcases of her voice (in manners both euphoric and horrifying), the best descriptor is an experience. Early ‘single’ “DO YOU DOUBT ME TRAITOR” rises and falls, an organic pulse that twists and contorts entirely around her voice. Her voice is the driver throughout the album, the point of focus around which everything else rotates. Anguish and fury meet in “SPITE ALONE HOLDS ME ALOFT”, which rises, bursts with anti-cathartic fury but ends, as many things do, with a whisper.

As a listener I’ve frequently taken to albums that are considered difficult. If we journey back to my high school years in the early 00s two albums I spent an enormous amount of time with was Halo’s Body of Light and Khanate’s Things Viral. Both drawn out and distressing experience, both considered wholly unlistenable in many circles. Caligula is at once like those albums and at once very much an experience like no other. Caligula isn’t catharsis, it’s an exorcism that can never really end. There are moments of mourning and moments of fury. Make no mistake, it makes it really difficult to describe and even more difficult to adequately write about in the context of a review.

As expressed elsewhere, Caligula is not a metal record but is among the heaviest things you as a listener is likely to experience, in this year or any other. It’s dense, it’s difficult, its 66 minutes do play out (for myself) surprisingly quick even if nothing about it is a breezy listen. I enjoy being stricken, almost dumbfounded by it. And driven by a question: If listening is difficult, what does that say about its creation?

Suffer the summer and suffer Caligula, the sounds of no prison lasting forever.