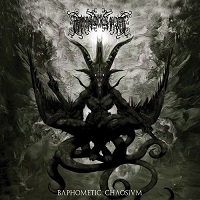 A prime example of how fast the underground moves – and how easy it is for a band to get lost on the shuffle – California black metal brigade have gone mostly quiet since their 2010 Extra-Dimensional Wound release. It’s tough for a fledging band to stay in the limelight without constant touring, and even while the troupe landed some high-profile runs with Behemoth and Kreator, they quickly retreated into hiding, readying for another go-round with their third album, Baphometic Chaosium.

The same issues that befell Extra Dimensional Wound are present here: Lackluster riffs, arrangements without grip, and the quasi-annoying hoot of vocalist Autrach. Autrach can’t decide where he wants to be – he’s in either raspville, or spoken-word land, and it’s a big detractor from the otherwise hum-drum black metal offerings on display. Not counting the warped riffing found on “Psychic Waters” or the sizzling tremor of “Chained to Decay,” there’s not much to be had that you wouldn’t find in some sub-Norwegian black metal offering. LSD is merely the bastardized, Americanized version of it.

For a band that’s from the gltized-up streets of Los Angeles, Lightning Swords of Death should find a new angle in which to work. You know, the “we are blacker than the hollow souls that parade down the Sunset Strip.” If anything, it will divert attention away from their brand of black metal which at this point, is anything but enticing.