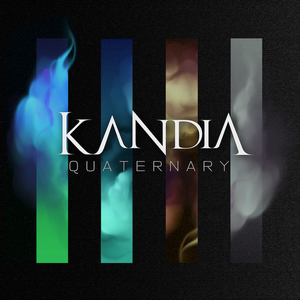 Portugal’s Kandia have been pushing alternative metal output since 2007, with two previous full-lengths to their name.  Recently signing with Frontiers for their third effort, Quaternary, it seems the time is finally right for the band to gain some increased exposure and traction within the scene.  Given the modern elements that the band brings with them, the timing couldn’t be better, given the swing in more recent years in more diverse and ‘tough to classify’ bands in which Kandia can happily call home.

Kandia have a formula that you can hear the basics from certain genres, yet when they put them all together, it creates something more distinctly their own.  The riffing, for instance, tends to have more of a modern prog (leaning almost in more of a djent feel), with much of the weight being swung by massive, hypnotic grooves that easily will get your head bobbing or toes tapping.  There’s an almost upbeat feel to the riffing, even at it’s darkest moments.  It’s easy to lose yourself in some of the chunky grooves of tracks like “A New Dawn” or “Turn of the Tide.”  But that’s not all that the band has to offer.  For one, there’s the remarkable vocals of Nya Cruz, who provides an excellent contrast to the rhythmic groove, allowing for some really ethereal moments to break through.  “The Flood” has some gentle, almost playful moments due to the playing off of her vocals and the atmospheric verses before they lay into heavier territory at the chorus.  The album closes with a really beautiful number in “Holocene,” which has a nice build-up and pay off to finish things up.  But some tracks also go into a more aggressive vibe, such as “PBP,” where some roared vocals also accentuate the song’s more brooding tone, along with even a few more trip-hop inspired moments.  It’s this sort of experimental dynamic that lends itself to some of Quaternary‘s best moments.

Kandia have a good understanding of what works within modern metal circles, and interject plenty of their own flavor.  Quaternary succeeds because it has plays into those notions and brings a genuine sense of excitement and curiosity on the part of the listener as they make their way through the album.  Worth a look if you want something that can groove hard, but also has a strong emotional resonance.