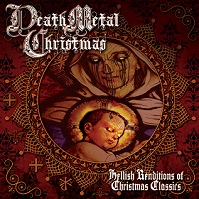 To the hardened metal fan, Christmas music has never mixed well with our abrasive form of music.  There have been some attempts, but they mostly fall into the ‘listen to it once’ and chuckle at the absurdity of hearing “Rudolph the Red-Nosed Reindeer” with gurgling death metal vocals variety.  Well, put away your Bing Crosby albums and rejoice, because Death Metal Christmas is the genuine article!

Featuring J.J. Hrubovcak (Hate Eternal) and his brother Mike (Monstrosity, Vile), Death Metal Christmas succeeds because of its musical choice cuts.  Instead of focusing on the goofy songs like “Rudolph,” “Frosty,” and anything involving Santa, more somber tracks like “We Three Kings” and “God Rest Ye Merry Gentlemen” are turned into blast-beat ridden, solos a-plenty, bludgeoning death metal monsters.  Closing song “O Come, O Come Azrael” has a classic crawl to it that feels like it could easily sneak onto the last Hate Eternal or Domination-era Morbid Angel with little difficulty.  Hrubovcak even saw fit to cleverly alter the lyrics to make them more “metal appropriate” without losing the general sense of the song.

The biggest highlight of the album has to be the re-creation of “Dance of the Sugar Plum Fairy.”  One would think it impossible, but it has been crafted into an absolute death metal beast.  It starts off in it’s classical form, if only to show you what they were working with before taking a sinister turn with some deliciously evil and infectious guitar work replacing the traditional strings.

Here’s to hoping a short release like this could become a holiday tradition as there’s plenty of material ripe for the taking.  For anyone who is in the mood for some metal Christmas music that doesn’t seem like a cheap ploy or joke, seek this out.  Yule be glad that you did!