Ironsword – None But the Brave (Shadow Kingdom Records) 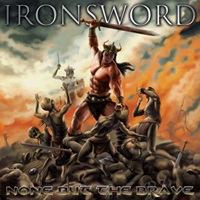 Loincloth warriors adorning your album cover alert listeners to not expect anything modern or breakdown related when it comes to Portugal’s Ironsword. Active for 20 years, they play a type of straightforward heavy metal that contains epic and true tendencies: the words telling tales of kings, battles, fires, and gaining strength through these ancient rituals. None But the Brave is the trio’s fourth studio record and first in seven years, also marking another lineup shift as new bassist Jorge Martins and drummer João Monteiro joining founding guitarist/vocalist J.M. for the first time together.

Since the band employs a power trio format, a lot of the rhythms and tempos possess that galloping, off to war nature that makes this style excel for people who love Manowar, Omen, and older Iron Maiden. I’d even throw a little Manilla Road into the mix when it comes to some of the lead breaks and overall guitar tone from J.M. – check out “The Usurper” and “Kings of the Night” to hear a lot of Mark ‘the Shark’ similarities. Martins and Monteiro supply the requisite thump and punch to hammer home the hooks, if albeit a tad predictable during certain transitions/fills for “Calm Before the Storm”.

Clichés can make or break releases like this – because conviction is one thing, and execution can be a totally different ball game. A lot of the choruses and riffs work in tandem too closely, and often you can pick out the influential band Ironsword cherry picked to modify as their own (“Ring of Fire” has a main riff that is straight up “Transylvania” from Iron Maiden). The main deterrent for full on appreciation could be the throaty, limited vocal range from J.M. – as he has one of those mid-range wails that is adequate but won’t put him up in the elite Dickinson/Dio class anytime soon. The trailing effects to his voice for “Army of Darkness” can be irritating (or comical), which is a shame as Jorge’s Steve Harris-like runs make this one of the best Ironsword tracks on the record.

Primitive production values, old school tones (wait ‘til you hear the steel pan hits for the drum fills on “Vengeance Will Be Mine”) – Ironsword live for the 1980’s, and as such possess that cult-like appeal that Germans and Greeks treasure. None But the Brave isn’t the worst record I’ve heard in the ‘true/epic’ metal – but it could stand to stretch a touch out of its comfort zone for a more satisfying effort.