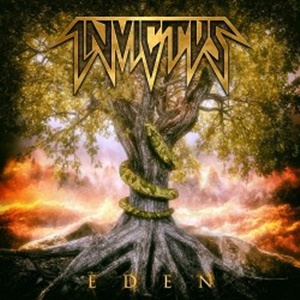 Germany continues to be a thriving marketplace for homegrown talent in heavy metal – Invictus another act from Bavaria that focuses on developing powerful music based on their 80’s influences for this full-length Eden. The quintet started in 2017, releasing Burst the Curse their first EP in early 2019, setting the stage for Iron Shield to sign the group. They’ve gained the opportunity to share the stage with international acts like Jag Panzer, Visigoth, and Refuge – so hopefully that seasoning can translate to a potent, powerful product even at this early stage in the band’s career.

At the core of Invictus their playing and style favors a mid-80’s Teutonic aspect of speed, harmonies, and double kick activities – not far removed from the early years of Helloween and Blind Guardian, along with the anthem-like proclivities of British bands such as Judas Priest and Iron Maiden. You’ll get cultural-like riffs and military-oriented drum patterns for “Through the Storm” one minute, then watch the band ramp up the speed riffs and power parts the next on “Thought of an Idea” – ensuring maximum dynamic momentum for the listener to throw up devils horns and energy release. Spreading emotional wings through the acoustic to electric ballad “Styx”, vocalist Nicolas Peter hits some bird call falsettos that prove he has the goods to take this band far – while the longest cut “Burning Empire” at almost six-minutes showcases the epic side of the group, the pacing, riffs, and atmosphere aligning well with say “Heaven and Hell” from Dio-era Black Sabbath. After a few spins, the songwriting contains a lot of twin guitar harmonies and solid tempos – but you just wish from time to time the hooks would be a bit stronger, as they don’t elevate themselves like the heroes they aspire to place themselves against (“The Garden of Eden” a big offender in predictability).

Maybe the kinks in the armor will work themselves out by the next record. For now, Eden has promise and a few strong tracks, but isn’t quite ready to place Invictus up the ranks of selling out bigger theaters anytime soon.