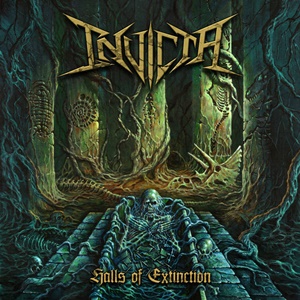 Previously receiving praise from Kyle through his monthly Bandcamp column back in April 2018, Canadian thrash band Invicta return with a full-length outing for Halls of Extinction. The trio of musicians handle multiple responsibilities – vocalist Kyle Edissi also tackling bass, guitars, and co-production duties (guitarist Jonah Kay the other co-producer), leaving drummer Reef Hassanien to slam on his kit for all its worth. These eight songs straddle the lines of death/thrash, incorporating numerous melodic and technical slants while never forsaking the individual distinction necessary to enthrall listeners plus motivating repeated exposure to the material on hand.

Smartly placing gang vocals on key moments for “Sacred Scourge” as an example makes the subsequent mid-tempo groove riff that much more sustainable, the band shifting between occasional moments of blasting and then reversing course into a Gojira-like rhythm combination. Acoustic segmentation gives chase to a thick bass propulsion and speedy riff antics during the title track, Kyle using his gripping, hoarse vocals to bark, command, conjure up assured neck whipping action as this frantic musical cyclone whirls through your favored listening device. The lead breaks are mesmerizing, filled with arpeggio shred activities and occasionally just settling into slower, repetitive themes that correspond to the individual song – proving the band can love Metallica as much as Children of Bodom, and also take in a bit of more new school outlooks that aren’t afraid to cross-pollinate between sub-genres. Many of these tracks exceed six-minutes (“The Rapture” that ends the album the longest at 9:18), but the diversity and intricate musicianship/ interplay justify the needs – additional narrative elements and a militant march gives “Dark Side” that extra anticipation measure as the arrangement builds through a progressive bass foundation and brilliant stop/start riff gallop passages while Reef showcases multiple facets of his thrash, death, and groove tempo box of tricks. There’s a definite aggressive, raw nature to Invicta when it comes to their playing – you can tell they pay respect to the likes of Sacrifice and Razor as far as passion, spirit, and channeling their energy for the right cause.

Those who are tired of Exodus/Testament style regurgitation in the new generation of thrash bands – Invicta will be your ideal cleanser to get you back in the right frame of mind. Let’s hope more people jump into the frenzy and connect with Halls of Extinction.