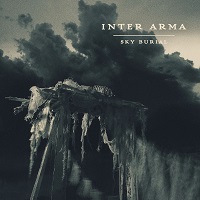 There are times when an album catches you completely by surprise and leaves you out cold. It takes familiar elements (in this case in both cases, a pairing of oft-overused elements) and fuses them in such a way that all that is left behind is goddamn, what just happened? Virginia based blackened/doom/sludge/<insertgenretaghere> Inter Arma has come out swinging with their sophomore release Inter Arma and is stuffed to the gills with content fusing doom-heaviness and blackened-blastiness. The nigh-70 minutes flies by in the blink of an eye, however, the band rarely staying in one mode or one pace for long.

Opener “The Survival Fires” bounces between these two ends with steady abandon, funeral dirges drowned in murk that give way to seething blast periods. “The Long Road Home (Iron Gate)” and “The Long Road Home” serve as a two-part monstrosity, the introductory track awash in gentle acoustic and slide guitar. The latter opening with a glacial pace and use of organ that places it in territory similar to last year’s phenomenal Ancestor’s album In Dreams and Time – mercurial atmosphere and a slow-burning misery permeate from start to finish and the album is honestly worth experiencing for this piece alone.

The contradictory moods of the dreamy and the caustic (“Destroyer” is a fuckin’ monster) flow throughout. Without having listened to Inter Arma’s 2010 debut it is difficult to say if this album is a step up or a continuation of what has always been a phenomenal band, but the fact remains: Sky Burial is a goddamned monster. Intricate, crushing, exhaustive – all these and more, this is a new love for life.