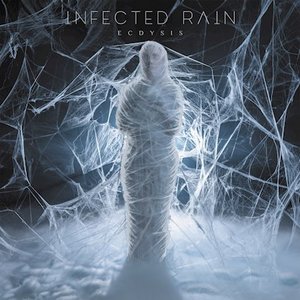 All eyes in the modern metal community seem to be gazing upon Infected Rain lately.  After signing with Napalm Records for their fourth album, Endorphin, they managed to turn more heads.  Couple it with their recent first appearance on US shores, and a fantastic live celebration of their thirteenth anniversary, and they are now on the breaking point of buzz.  So Ecdysis sweeps in at exactly the right time, with all the passion necessary to ensure the band breaks even more ground this year.

The merger of Infected Rain’s varied elements is really what makes Ecdysis their strongest album yet.  The combination of that moody, dark atmosphere with aggressive grooves, and effectively positioned electronics makes for an addictive listen.  Early single “The Realm of Chaos,” stands as a clear champion of this merger, with a punchy knack for mid-tempo grooves and vicious energy, but taps into a pinch of an eerie mood with the occasional gentle whispers and otherworldly melodies.  The sense of melody with songs like “Goodbye” and “Everlasting Lethargy” lend the listener an easy in – enticing them further into the music with Lena Scissorhands’ gorgeous clean vocals, something that makes for a adrenaline-pumping transition with the latter track as it swings between snarling riffs and ethereal beauty.  Another strong point the band has really continued to lean into is the sense of urgency.  There’s not a track that doesn’t have that feeling that grabs your attention, from the hypnotic chugging of “Showers,” to the raging “Fighter,” to even the completely electronic “Nine, Ten,” where beats gently crawl under your skin while Scissorhands takes center stage with a sweeping performance.  Bookending the album with the two-part “Postmortem,” the album comes full circle to bring home all of the points made already, working as an effective showcase of the band’s ability to provide a spellbinding display.

Equal parts energy and emotion, Infected Rain really taps into what works best for them on Ecdysis.  It merges elements that are aggressive yet beautiful, haunting and compelling, and wrap it up with a sound that makes itself more emotionally impactful and resonant with each listen.  An incredible opening to 2022, which if things move properly, should allow Infected Rain to fully capitalize on all of the well-deserved buzz coming their and launch them even further into the metal stratosphere.