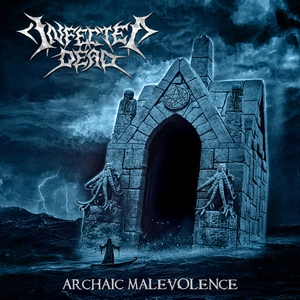 There’s so much death metal out there that sometimes it’s tough to differentiate the solid from the mediocre. With so many variations, one gets tied up into the subgenre game as well. But in this genre, what it often comes down to is sheer energy and aggression. Something that relative newcomers Infected Dead never lack for on their Archaic Malevolence EP.

Waving a decidedly modern flag of death metal (a la The Black Dahlia Murder or Aborted), Infected Dead often reach a pace that is nothing short of blistering. But like the aforementioned acts, the band already has a good grasp on making sure that each track has some catchy hooks and strong melodies to blend into the otherwise visceral approach. Dripping with blastbeats and sheer velocity, there’s no denying that the frantic feel alone is not without it’s own charms. But in combination with the melodic elements really help a track like “Resurrectionist” to stand out. However, a one-tempo band this is not, and the highlight of the release is that of “Invocation of Unspeakable Gods,” where high speed is traded entirely for bruising, mid-tempo grooves of the most addictive order. It’s a nice change of pace for the act, and while some sleek grooves do make their way into the other tracks (“Forced Existence” quickly comes to mind), it’s nice to see that they can still perform with just as much intensity when things slow down.

With 5 songs and a brief introduction, Archaic Malevolence is the type of EP that leaves the listener wanting more. It may be only a straight-forward attack, but the basics are sounded nailed (and obliterated). Feral energy with hooks – bring on a full-length.