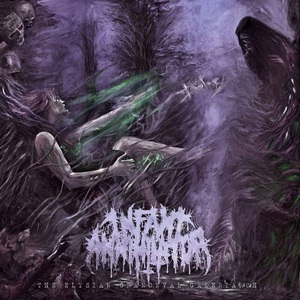 Following a similar trajectory to Rings of Saturn, Infant Annihilator take a much more technical approach to deathcore. They even have had similar controversy in regards to recording “help.” IA also have a history of stirring up some controversy in regards to their music videos, as the recently NSFW video of “Motherless Miscarriage” can attest. But let’s put all that aside and focus squarely on what’s important – the music itself.

If taken on an individual level, many of the songs on The Elysian Grandeval Galèriarch work as a burst of “whoa, that was intense.” They crank the speeds up to near-absurdity, with dizzying technical riffs swirling all around in complete chaos. “Baptised. Bastardised. Sodomized” is a good example of this, with incredible speed rushes and a brutality-first mindset. Certainly of some serious intensity, but then things get brought down to near-crawls with massive breakdowns. A breakdown once in a while can devastate, but at the lengths that they are employed on EGG, they start to lose meaning. No doubt, with some of the frenetic riffing the band employs, they are rather skilled but they start to lose things on the songwriting end. Mostly because they fire off either incredibly fast riffs that simply aren’t that memorable after a listen or two, and they drop breakdowns that tear away any sort of momentum the band had going. True, there’s an occasional lead or moment of atmosphere but that gets us to the real killer here – overall length. At near an hour, it’s simply too much content for this type of music. “Behold the Kingdom of the Wretched Undying” itself clocks in at an unnecessary 17-minutes in length, yet does nothing that the other, shorter songs can’t just as easily do. The album simply becomes a mess of speed and breakdowns, riddling everything to the point that it sounds the same as the song before it.

Extreme for the sake of extreme seems to encapsulate what Infant Annihilator are bringing to the table. Over-the-top vocals (that are way too high in the mix), chaotic levels of speed, and chugging breakdowns. While it could be a formula that works, it’s just too much to take in. Shame too, based on the riffs it seems they have the ability to design something much more coherent. 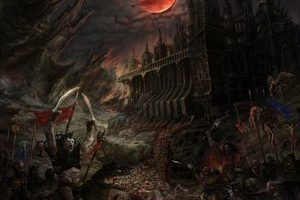