Illuminata – Where Stories Unfold (Self Released) 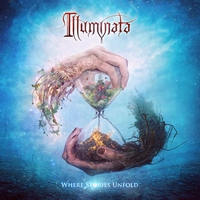 Describing themselves as cinematic metal, taking influences from big blockbuster films to write songs worthy of soundtracks, symphonic metal quintet Illuminata, from Graz, Austria, burst onto the scene in 2008 with their full-length debut, From the Chalice of Dreams. After a number of lineup changes, and a shift from the dual vocal attack of sisters Katarzyna and Joanna Nieniewska, employed on previous album A World So Cold, Joanna (ex-Visions of Atlantis) left the band and Illuminata settled on Katarzyna handling vocal duties for its latest release, Where Stories Unfold.

Stories bears a striking resemblance to past offerings of symphonic power metal leaders Nightwish. A crowded genre to be sure, it can be difficult to differentiate from your peers, and while Illuminata may not always succeed in this effort, it’s not from lack of trying. For Stories, the band incorporated backing vocal choirs and teamed with the 60-piece Czech Film Orchestra, which recorded the soundtrack to the second season of Game of Thrones, to add that cinematic soundtrack quality to the songs. Where Nightwish come off as darker and heavier, Illuminata creates a more light-hearted, playful vibe. Cascading melodies, rhythms that ebb and flow and various mood and tempo changes permeate the album, especially in closer “The World Constructor” and “Eternity of Today,” where Katarzyna’s vocals evoke elements of Liv Kristine and Sharon den Adel. There’s a lot to take in here. For instance, “Arbitrary Asylum” begins with creepy child-like chanting and agonized screams accompanied by waves of ominous orchestral tones before violins join with Sabrina Supan’s sharp, melodic keyboard notes over the top of the hammering double-bass drumming of Tom Kern and driving guitar riffs of Luki Knoebl, all rounded out with Katarzyna’s haunting vocal lines.

Cinematic elements come into play halfway through “Danse Macabre” when Sabrina’s keyboard patterns signal a scene of walking into a saloon in the Wild West, as well as on “The Brass Ring,” which begins with dark keyboard notes that lead to a horn section similar to the parade at the end of “Star Wars Episode I: The Phantom Menace.” Luki’s hammering guitar riffs follow, supported by playful orchestral melodies in the verses and backing choir vocals joining Katarzyna in the chorus. There’s a carnival-like atmosphere to “Brass Ring,” reminiscent of Nightwish’s “Scaretale,” and a section where flutes create the feeling of a spinning carousel about to break down before launching back into an epic orchestral melody that would sound at home in a James Bond film score.

Backing male vocals are another area where the band shines, but they are used too sparingly. Whether combining with Katarzyna’s leads in the chorus or trading off in the verses of “Entwined,” the male vocals create a nice balance that isn’t used enough on the rest of the songs. Credit to Illuminata for releasing a well-produced album, grand in scale and rich in melodies, but if the band wants to move out of the shadow of genre stalwarts Nightwish, it needs more variation in its sound. While it remains to be seen which path the band will take, it possesses the talent and tools for a bright future.