I, Forlorn – My Kingdom Eclipsed (Self-Released) 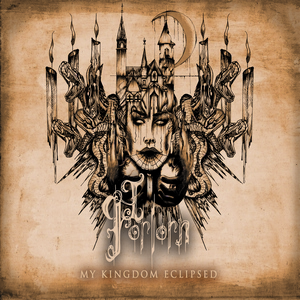 From the mind of Jurre Timmer, the man who brought the band Algos to life as well, comes a new melancholic doom act by the name I, Forlorn. Whereas Algos had some more melodic death character to it, consider I, Forlorn more in the classical death/doom territory. Heavy, soul-crushing weight with an emotional pull.

My Kingdom Eclipsed is a conceptual album, and the goal of the band is to capture the essence of feeling lost. So don’t count on a lot of happy and upbeat moments to pop up as you listen. But that doesn’t mean that the album can’t be majestic in its mournful state. My Kingdom Eclipsed is at its strongest when providing some heartfelt emotion, contrasting with a more heavy and downtrodden doom metal ‘collapse under the weight’ vibe. The title track gives a good indication of this juxtaposition, with agonizing growls and lumbering riffs pairing off with more synth-laden and atmospheric segways, and even moving into faster, blasting sections. So there’s much to take in over the course of a 7.5 minute track. Due to bringing in so many influences, there’s never a track that feels “too much,” even with songs ranging solely from 6-9 minutes in length. The melodies are the piece that holds it all together here as well – whether it’s a gloomy and heavy riff, soaring guitar melody, or sullen keys, the somber approach is always going to keep your attention. Lastly, despite it being a one-man effort, it doesn’t suffer from the “one-man sound,” instead feeling much more akin to a full-band release.

A solid and well-rounded debut from I, Forlorn. Effectively gloomy and melodic, there’s still enough doomy power behind it to capture the imagination. Expect nothing less from the talented Timmer, in whatever style he chooses to dive into.