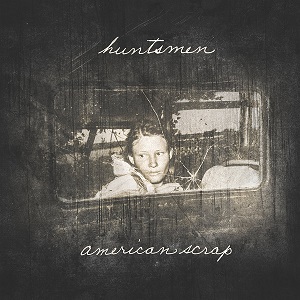 Alas, the age of Americana metal is here with Chicago’s Huntsmen. Not say the likes of The Avett Brothers, Mumford & Sons and The Lumineers should be quaking in their suspenders and outsized beards, but the heavier alternative to the style provides a welcome respite to the somewhat faux/salt-of-the-earth nature in which these groups operate. With two EPs already to their credit (2014’s Post War and 2016’s The Colonel), American Scrap, the band’s first full-length takes on, according to the band, “the paradox of American nationalism and pride, given that we are a country of immigrants.” Well-stated and certainly timely.

As with any and all Americana bands, it’s down to the vocalist to drive home the story, of which Chris Kang does quite admirably. He’s first out of the gate on album opener “Bury Me Deep,” a soulful acoustic jaunt, with lush chords and thoughtful lyrics. (More, please.) The subsequent heaviness on “Pyre” gives way to the multi-layered vocal harmonies on “Canary King,” a cut where Kang truly proves his worth as a vocalist, even as the band takes on a sludge-Sabbath death-dealing with Neurosis sort of vibe, just without the apocalyptic visions and harshness.

Perhaps that’s why American Scrap gets on so well — it fits the mold of a bouldering slab of monolithic metal, but has the tenderness and touch to work around such boundaries. And these songs are largely dynamic, full of ups and downs, highs and lows, but built tough and rigid, much like the people they are about. Make way for metal story time.