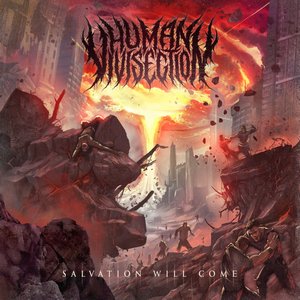 The problem inherent with a lot of slam bands is when they revel in excesses (much like other genres). It may sound ridiculous, but sometimes bands can actually be too heavy. It starts to come across as ridiculous or silly sounding, all while the band is trying to be deadly serious. Human Vivisection doesn’t have this issue, and Salvation Will Come sits as a solidly build piece of brutal, slamming death metal.

Instead of aiming for the most ludicrous and disgusting slams in the world, Human Vivisection holds onto some restraint. This isn’t a bad thing, as it allows the songs to really feel as such, instead of exercises in building up riffs just to throw in a devastating slam. The surrounding music is just as thrilling as when they drop a pummeling slam moment (like they do regularly, such as in personal groovy favorite “Sickening”). Groove and mid-tempo and higher bits keep the songs moving efficiently, providing a sound that doesn’t feel simply one note, like the multiple tempo shifts through a song like “Insanity Reigns over Conformity.” It’s brutal and heavy, and of course it’s completely unrelenting over the course of the album. That in turn, brings up the only drawback to this otherwise explosive release. This is a 42-minute brutal death metal release. There’s just too much stuff here, and despite the band’s best efforts detailed above, it just can sustain for that long. Listening to a few songs is fantastic and sure to get a rise out of the listener, but it really starts to drag towards the end. There’s a reason why lots of these releases sit around 30-ish minutes, which is a much friendlier timeframe.

That said, Salvation Will Come is still a stronger slam release than many. It’s good to hear a band trying to retain an all-around vibe of brutality in this niche genre. If they can effectively trim some fat next time, Human Vivisection will be unstoppable.