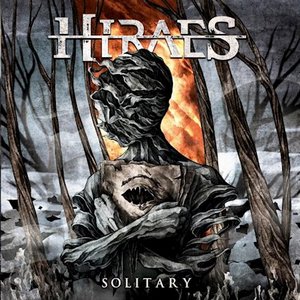 Formed from the remains of long-running melodic death metal act Dawn of Disease (all of them sans for the vocal position, in fact), Hiraes is a new band that also plays melodic death metal albeit in a slightly different direction. Snagging extreme vocalist Britta Görtz (Critical Mess, ex-Cripper) to command the charge, Solitary showcases a melodeath sound that gives its nods to the older and heavier directions of the sound while bringing it up to the 2020s in production and style. In short, a treat for die-hard fans of the style.

For those who still need some convincing after the opening remarks, Hiraes plays melodeath in a style that isn’t directly tethered to one of the usual sources (e.g. Gothenburg). Instead, it’s almost more in the style of death metal with melody, with some nods here and there to different themes. But when it’s swirled altogether like each track is, it feels quite seamless and exciting. You can get some thoroughly heavy moments, like the gradual build-up of a song like “1000 Lights,” where chunky grooves and mid-tempo riffs lead into a thrilling uptick at the finale, or the throttling “Grain of Sand,” with its charging opening and solo that leads into galloping riffs and a catchy chorus with some excellent melodies layered in. It’s those shifts in dynamic that allow the band to really be most successful, with highlight “Outshine” having bits of more frantic energy mixed in with some more crawling, sorrowed melodies that feel just as urgent in tone. Sweeping melodies are the band’s centerpiece, but Görtz’s vocal performance also gives it a sense of added extremity when needed (see the title track), or some anguish in the more sullen moments (see “Strangers”), fully augmenting the entire package.

Hard to find many faults in Hiraes’ winning formula to melodic death metal. Powerful, catchy, energetic, with just the right hint of some occasional sadness and beauty. Solitary is a great, brand new start for these veteran performers.