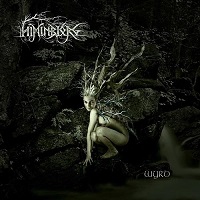 Buried somewhere in the rubble and glut of Viking metal bands over the last decade (or so) is France’s Himinbjorg. Introduced to this scribe all the way back in 2003 (back when physical promos where still a thing), their Golden Age effort was a hefty, but valiant body of work, taking the same path as late-90s Enslaved, albeit without the esoteric flamboyance. Since then, main man Zahaah and a various cast of characters have hung around in the mid-regions of the epic/Viking metal scene, with their last album being 2010’s Chants d’hier, Chants de guerre, Chants de la Terre…With the ink dry on their deal with Osmose, now is a good time for folks to be introduced to the band via Wyrd.

Punctuated largely by driving, almost simplistic tremolo riffs of the mystical variety, the approach throughout Wyrd isn’t necessarily to sink some golden oars into the water with overblown chanting or outside instrumentation, but to utilize the profound depth of Zahaah’s songwriting. Such examples can be found on opener “The Sword of Dignity,” which takes the aforementioned guitar strokes and drives them home over the course of a seven-minute journey. It’s a titanic, moving song; so is “The Word of Men Without Virtue,” where it’s like 1997 all over again, just with better production.

Down on through, the nine cuts that make up Wyrd blend seamlessly together, with the band’s deft and masterful take on black and death metal fully realized in songs like “The Mirror of Suffering” and “The Eternal Light.” Aside from the fact that DR needs to take another stroll through the band’s vast catalog, Himinbjorg are due for some proper recognition. France may not be known for its plunders into Viking metal territory, but here’s your best a choice, a band that’s been here all along.