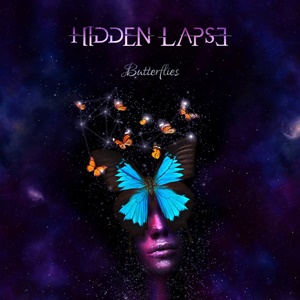 Originality and distinctive qualities remain paramount in sustaining longevity in the metal realm. It’s not as easy delivering the first aspect, but these days it appears musicians and bands appear unafraid to explore diverse influences to inject them into proven platforms for the secondary marker of uniqueness. Italian foursome Hidden Lapse on the surface possess a firm affinity for power/progressive metal when taking in the nine tracks that comprise their second album Butterflies – but there’s an added alternative/modern aspect musically beyond the emotional vocal melodies that could allow the band broader appeal to carve their own audience.

There’s a crunchy, heads down guitar foundation courtesy of Marco Ricco that gives songs like “Cruel Enigma” and opener “Dead Jester” a bit more of an Evergrey/ Nevermore flair – even as the funky/popping bass lines from Romina Pantanetti and effortless keyboards glide in and out of the proceedings. The band intertwine some sinister Dream Theater/ Symphony X-like progressive mechanics during the verses and instrumental sections with radio-friendly vocal melodies and simplified choruses – and much of the appeal lies in the seasoned, professional deliver of singer Alessia Marchigiani. Her voice has that aural charm and grace that put Anneke van Giersbergen on the map with The Gathering during the mid-1990’s, as well as spots of Charlotte Wessels of Delain – the modern, circular rhythm hook percolating throughout “Third” showcasing her emotional connective nature up and down from verses to chorus and back again. Pulsating keyboards match a lower chugging guitar hook to hypnotic effect on “Glitchers” – while “Grim Poet” features a bass solo amidst it’s conventional 6:51 progressive framework. It’s as if Hidden Lapse took decades of power/progressive influences, put them into a collective idea pool – and churned out stronger, catchy arrangements with a touch of modern/alternative flair while see-sawing between intricate musicianship-filled work and engaging melodies/hooks.

We know plenty of people who struggle to get into power/progressive metal because they feel like it’s too complex and doesn’t contain enough catchy elements to capture the interest of the common music lover. Hidden Lapse are the band for you through Butterflies if you want to understand these genres but not feel overwhelmed with the information cast forth.