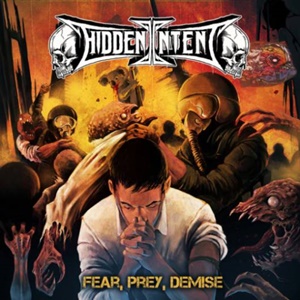 Unapologetic regarding their unwavering affinity for the 80’s-throwback thrash stance to their style, Hidden Intent from Australia have accomplished a fair amount in establishing themselves worldwide in a short period of time. Since their 2011 inception, they’ve released their debut album Walking Through Hell in 2014, toured mainland China with Danish veterans Artillery, played festivals in the US (Full Metal Assault), Thailand and their home country plus opened locally for diverse bands such as Helloween, Queensrÿche, and Venom. The follow-up album Fear, Prey, Demise gains wider appeal through Scarlet Records, and is another testament to the mass exodus of the movement from all four corners of the globe.

Using Bay Area influences as the base platform and branching out into Teutonic/Scandinavian aspects as far as finesse and potency, the trio prefer to mince no words in their assault on aural action – machine gun in their approach for the powerful riffs, catchy gang vocals, and transitions that make mandatory movement from all appendages in the pit. Bassist Chris McEwen pushes his low-end action to match the intricacies of guitarist Phil Bennett, captivating a la Frank Bello or D.D. Verni during the double shot opener of “Prey for Your Death” and metal anthem “Addicted to Thrash”. A sense of humor comes out in the shortened “Drop Bears Are Real”, an ode to Australia’s favorite creature done with vocals and riffs that marry S.O.D. with Nuclear Assault (favorite line- ‘vegemite won’t repel’). Midway through the album “Apocalypse Now” displays the group at its epic, more musically involved stature – engaging back and forth bass/guitar passages, heads down crunch, plus a mid-section where the bottom literally falls and you hear a simplistic bass refrain, muted guitars, and distant drums to elevate the dramatic tension while building atmosphere in an 80’s Metallica manner. Chris also doubles on vocals, and his voice has a spitfire militant low register that reminds of Phil Rind from Sacred Reich in his early Ignorance days. The only misfire is the modern/staccato squeals and semi-bottom heavy nu-metal stance for “Petrified” that would be best served for Pantera and their offspring instead of Hidden Intent, as it comes off less genuine against the rest of the material here.

Hidden Intent aren’t aiming to rewrite any thrash textbooks – this ten-track effort just mixes up mid-tempo to slightly speedier tracks in that familiar connective mold where sweat profusely pours to the ground, blood may appear, and everyone leaves with a smile on their face (and possibly a tooth or two missing).