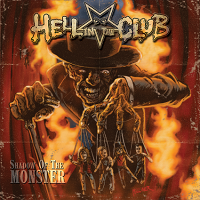 At some point, singing about fantasy and folklore gets old. Or maybe doesn’t, but tackling some more “carefree” topics feels appropriate. Either way, such is the chosen path for Elvenking singer Damnagoras (real name: Davide Moras), who has managed to become one of the more unheralded vocalists in European melodic metal. Even as the man’s career progresses (read: tacks on years + albums), he’s managed to retain the peppy, kiddie element to his vocals that made a lot of folks first take notice upon Elvenking’s The Winter Wake album. Thinking it could be put to greater use in a much-less demanding and/or serious platform, Mr. Damnagoras also holds court in the light-hearted party band, Hell in the Club.

The band’s third album, Shadow of the Monster, carries little of the substance or intrigue an Elvenking album would. Rather, it’s jam-packed (or should we say “party-packed”) with songs that leave little to the imagination – “DANCE!” “Enjoy the Ride,” and “Naked” all purvey a rather obvious easy, carefree angle that was predominant three decades ago. However, Sir Damnagoras has the right kind of voice for such songs – he’s ballad work on the title track is pretty impressive; same with “The Life & Death of Mr. Nobody.” Yet his best work comes on the aforementioned “Naked,” which if this were a totally different time and place, would be quite the romantic FM radio rocker. Alas, a scenario like that is impossible circa 2016.

As long as one goes along and takes the piss (not literally) with Hell in the Club, then Shadow of the Monster functions nicely as the brainless album that it was intended to be. If anything else, it’s a welcome side-avenue for Damnagoras to lay down his imitable vocals on a set of tunes that would never get the thumbs-up in his main band. 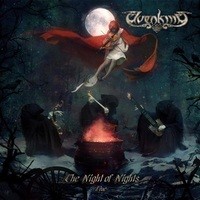