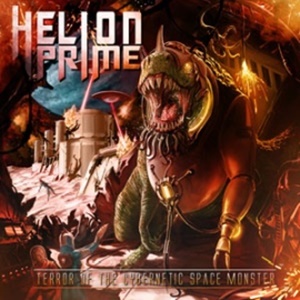 If you are an early follower for this California-based power metal act, you probably know that changes have been afoot in the Helion Prime camp since their 2016 self-titled debut effort. Unexpectedly growing out of a love of science and metal from a side project to a full-fledged act, singer Heather Michele stepped away to concentrate on her main band Graveshadow – necessitating a new vocalist as a contract offer came from AFM. The search is over as they say – Cyprus native Sozos Michael taking over, turning a new chapter for the group as Terror of the Cybernetic Space Monster hopes to prove that the switch up from female to male vocals doesn’t diminish any of the force the band delivered previously.

The music builds out of a power metal foundation into occasional progressive and modern edges – be it through specific guitar tones or outside angles, you can tell that the members of Helion Prime on a song like “Atlas Obscura” take cues from Iced Earth and Blind Guardian but also can sneak in a bit of Trivium to the mix. Uplifting music and accompanying vocal melodies stirs the sing-a-long traveler in us all for “Urth”, the wall of rhythms, steady/pounding double bass and multi-layered chorus perfect for that mead hall throng ready to savor an anthem. Progressive gallops punctuate the 8:16 epic “The Human Condition”, the twin guitar nuances from Jason Ashcraft and Chad Anderson setting up seamlessly, Sozos channeling a mixture of Hansi/Blind Guardian-like choir background voices to volley against his natural, emotional main delivery that absolutely rivets in prime melodic/power presence (especially during the quieter section mid-way through). Adding in acoustic guitars for the opening parts of “Silent Skies” may make you think this is a ballad offering – only to quickly switch things up into another solid Iced Earth-like electric affair featuring culturally-engaging rhythms, pounding drum fill work, and addictive hooks that stay with you for days on end. Ending with the monster 17-minute plus epic title track, it features guest singers like Brittney Slayes (Unleash the Archers), David Brown (Chaos Frame), and Haydee Irizarry (Aversed, Carnivora) and begins very somber with piano, building in intensity, the guests weaving in and out depending on the characters in play a la Avantasia or “Dante’s Inferno”.

Sailbot makes another appearance on the Marc Whisnant cover design – and we all know the importance of mascots in this genre right (cue Eddie or any falcons/birds here). Overall Helion Prime have accomplished everything and more that can be expected out of a singer shift – without losing the keys that garnered them respect and proper buzz in their earliest days. Sci-fi stories and horror/terror elements combine to give Terror of the Cybernetic Space Monster that extra ‘cool’ factor that should appease most power maniacs.

Helion Prime – Everything In Question 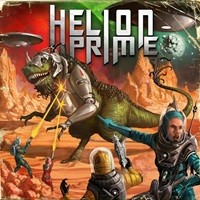