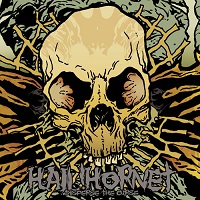 Already tired of this annoying “beard metal” thing. It’s hard to get behind band’s who immerse themselves in crust and noise, thinking there’s going to be some semblance of originality or better yet – actual listenable songspresented. Shame with Hail! Hornet and Disperse the Curse is that the band is loaded with some quality names from the stoner/crust scene including members of Alabama Thunderpussy, Weedeater and Beaten Back To Pure. Nothing added up properly here, that’s all.

The primary drawback here is singer

T-Roy Medlin (of Sourvein and Buzzov*en fame). Medlin doesn’t add much outside of screaming his head off, and it curtails the crushing moments of opener “Shoot the Pigs” or the thrashing “Gifted Horse.” When the band slows things down and gets doomy, as in the title track, it’s as if Medlin knows of nothing else to do but scream and be as colorless as possible. Yargh.

There’s no shortage of aggressive moments to be found on this 11-song offering, save for the fact that repeated listens will prove this album to be one giant bleed-together. Because there’s such a sonic overdrive (guitars on 11, bass on 11, drums are noisy and reckless), Hail! Hornet can’t do much else other than wade themselves through the sonic pigsty they created. Shame, ‘cause there’s some half-decent ideas brewing here.