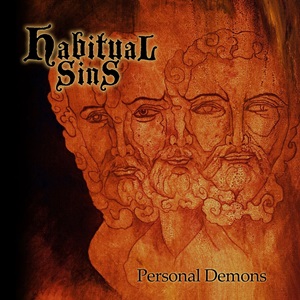 Consisting of veteran Pittsburgh tri-state area musicians best known for previous work in Icarus Witch, Order of Nine, and Dofka, Habitual Sins aims to keep the US metal movement alive and kicking through precise songwriting and performances on this debut album Personal Demons. Those frequent purveyors of the underground and independent label scene probably recognize the work of Matthew Bizilia and Jim Dofka – who along with ex-Icarus Witch guitarist/keyboardist Steve Pollick produce ten tracks of old school power metal with occasional nods to doom to make a dark, mysterious journey that takes listeners back to pre-Headbangers Ball days. Remember having to read magazines, listen to specialty radio shows, or raid your friend’s album collections – plus comb through local record shops to make metal picks based on album covers, without a lick of sound ahead of time?

Most of these songs contain classic power chords and straightforward structures – allowing the proper accents on high note melodies or shredding lead break flurries to shine when called for. The guitar action contains a lot of neo-classical flair, while still maintaining a driving, mid-tempo atmosphere – as material like “Far Beyond Hades” and “I Pray for You” sits in that early Savatage/ Metal Church platform. Those familiar with Matthew’s previous work in Icarus Witch know his multi-faceted voice quite well – rearing back for sinister screams and vicious melodies that traverse David Wayne, Jon Oliva, and Ronnie James Dio textures. Check out the Solitude Aeturnus-esque “Kiss of Shame” and twin guitar harmony driven anthem “The Djinn” to understand his delivery and pipes remain resolute and pristine for the metal cause. In a day and age where production values can be too punched in or perfect, it’s nice to have a mix that’s aggressive while making things dynamic – probably a testament to the experience of the musicians on hand to get things right. And at a tasty old school album length of 40 minutes, pleasure coincides to alleviate any stress from traffic jams or commute struggles.

Habitual Sins get off to a robust beginning with Personal Demons – let’s hope that the recent upswing in melodic power metal from audiences young and old allows these musicians the opportunity to gain modest appreciation and long-term appeal.