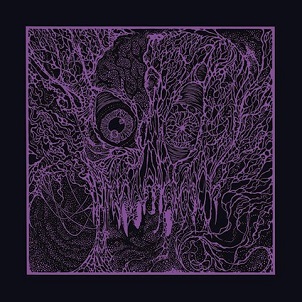 An introductory EP/7-inch. Always a good idea, especially when you’re a niche, undeniably raw (and new) band such as Grave Spirit. The debate over whether to release albums anymore intensifies, although in metal, it’s a safe bet they’ll be hanging around for quite some time, but, peppering and/or prepping one’s audience with a two-song release such as this appears to be the way to go. Formed in early 2017, Grave Spirit is a black/death/thrash amalgamation, spewing plenty of sonic bile on their dastardly The Beast Unburdened by Flesh EP.

The usual production tactics persist: Drums back in the mix, overwhelming guitars, and vocals buried among piles of distortion. It’s a time-honored way of easily creating atmosphere, something the three gents in Grave Spirit do without issue. “Absorbing Essence from Underneath,” with its Norwegian-tinted melodies and Sarcofago pace is a sheer ripper, while “The Beast Unburdened by Flesh” peels off a multitude of grimy, vintage death-soaked riffs, all with the angle and premise of early black metal. Clearly just a taste, but The Beast Unburdened by Flesh is a savage one.