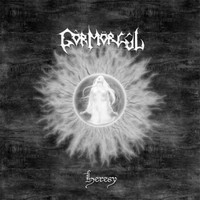 Good old blistering, no-frills blackened death metal. The old fashioned way. More and more bands are deciding that it isn’t necessarily for them (and moving into the modern fields). No worries on this end, as it leaves room for new talent to jump in and show the world that it’s not as dead-end of a style as many might think. There’s always room in this scribe’s CD shelf for an album that just flat out pulverizes the listener from start to finish. That’s what you’ll get from Heresy, the Italian band’s second full-length effort.

Gôr Mörgûl serves up blackened death metal in all of its full-blown fury. You won’t find much in the way of breaks or catchy melodies, but you will find utterly relentless brutality from beginning to end. Frequently moving at full speed, Gôr Mörgûl grasp the power that bands like Behemoth and Belphegor are able to pull off. Lots ‘o blast beats to be had, obviously, but they are often coupled with riffs that are injected with death metal groove. “Martyrion” slows things down to put an oppressively heavy riff into effect, giving it almost a majestic feel compared to the blistering pace of some of the other tracks. “Apostasy” and “Indoctrination” are the type of songs that exemplify that type of mindset: pure, unbridled aggression. The thing that blackened death is best at.

One could argue that it’s nothing you haven’t heard before (and yes, due to the nature of the music it will tend to blur towards the finish), but those looking for a good adrenaline rush will find exactly what they were looking for with Heresy. Nothing but musical bludgeoning here, and there’s something to be said for it to be done from start to finish like Gôr Mörgûl have done.