Golgotha – Erasing the Past (Xtreem Music) 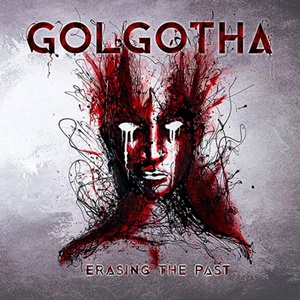 Together two previous times during the 90’s and early 2000’s, Golgotha returned to the scene a third time in 2014 and have been active again ever since. Spending their early years on Repulse Records, they have now shifted to Xtreem Music for their fourth full-length (and first in fourteen years) Erasing the Past. The trio possess a new drummer in Tomeu Crespí, but the mainstays remain with guitarist Vicente J. Paya and vocalist Amon López – as well as a death/doom blend stylistically that contains many elements of somber gloom and despair that revert to acts twenty to twenty-five years ago.

What’s evident throughout this release are the dual savage screams and morose clean delivery Amon unleashes – the man could be a vocal stunt double for Fernando of Moonspell especially when you hear his baritone melodies and phrasing during highlights such as “Distorted Tears” and “Rewrite Your Destiny”. As far as the music, the band sit in that European doom sweet spot when artists like Tiamat and Paradise Lost were making a marked impression and ascension up the underground ranks during the late 80’s to mid- 1990’s. The death section of Golgotha comes in the fierce screams or growls employed (think Wolfheart here) to emphasize heavy verses and contrasts, making “The Way to Your Soul” an evil epic of sweeping emotional proportions, the slower double kick accents sending shivers as the proverbial bell tolls away. Haunting keyboards extend the doom/gothic nuances, but never overshadow the guitar, bass, and drum performances. The layers of guitars continually keep the main theme at heart, swinging pendulums at a snail’s pace to bring that depressive heaviness full circle, even in a shorter 4:26 timeframe with “Enveloped in Fog”. This is a record you have to be in the right mood for – Erasing the Past reflects best upon those followers in need of that cathartic release from the pain, agony, sorrow, or frustrations that have been pent up in life.

At eight songs and 45 minutes, Golgotha provides just enough death/doom to process but not exhaust the listener – a tough tightrope to cross in this sub-genre. We know plenty of listeners who love the purity of doom with the power of death harnessed in the right direction – if that’s your preference, Erasing the Past delivers on all fronts and could be another satisfying record to add to your collection.