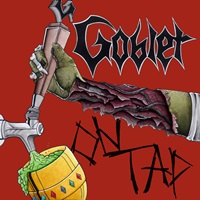 Fortune to witness this western MA quartet a few times in various New England venues (including a hilarious night in NH opening for Night Demon where a cardboard cutout stood in for a missing bassist Peydon Twing), Pittsfield’s Goblet tow the lines of classic and newer crossover metal for their second EP On Tap. Unsurprising to these ears given the diverse musical climate for most New England musicians, the five songs meld together aspects of doom, death, thrash and black metal – ensuring at the very least that riff or tempo flatness is highly unlikely here.

Seeking out mixing and mastering expertise from Toxic Holocaust’s Joel Grind could give Goblet a touch more credibility than your average underground act who perform in this style these days. Fortunately for their prospective audience, this is 18 minutes that is well worth your attention if acts like Municipal Waste and 3 Inches of Blood matter to you just as much as Black Sabbath (leaning in the Ozzy era) and Slayer/Testament. Jesse’s blood bursting screams during the quick hitting “Party Monster” are worth the price of admission alone – a blackened rasp that tempered with his gruff thrash-oriented delivery opens up possibilities for the band in the heavier realms of metal.

Their live performances made me a believer – better get the big kegs ready, as On Tap keeps the bastard doom/thrash train flowing as another New England gem to latch aboard.