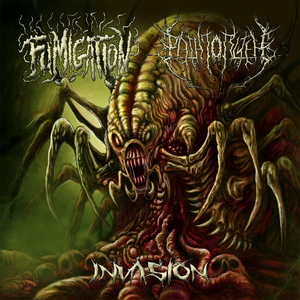 Always a good way to introduce oneself to fresh acts, a good split EP can give you two new bands (or sometimes, even more) to investigate further. Invasion does exactly that, bringing about some exposure for two bands with distinct themes. Fumigation hits first with some pest-control themed action, followed by the Lovecraftian-influence of The Path of R’lyeh.

Important to have a good fit, but not sound too similar to each other, as such Invasion takes to slightly different approaches to death metal but with the notion that if you like one, you’ll surely also like the other. Fumigation opening the album with some heavy and dark melodies that suit the sometimes chaotic energy of the band to a tee. It’s not an over-the-top blastfest, and strikingly catchy moments (a la “Forced Vaginal Harbourage”) give the band an edge over some of their peers, particularly if they continue to develop it. No one is going to mistake the band for melodeath anytime soon, but it’s a strong point when you can insert some memorable groove into a quick slamming ripper like “Earwigs & Earwax.” In contrast to Fumigation, The Path to R’Lyeh capture an approach that slightly more technical and slightly less melodic. They don’t shy away from massive acceleration, with songs like “Extra-Terrestrial Abomination” benefiting from an intense and frantic tempo. Though more technical, it’s still gritty and keeps that visceral edge that defines more traditional/brutal death metal. Some occasional groove (“Y’ha-nthlei’s Awakening”) does help to ensure this vibe.

Both bands worthy of some continued future investigation, Invasion makes good use of what splits are all about. Well-executed death metal from both acts, not being reliant on sheer brutality or mind-numbing blasts, but carrying on the aggressive tone with enough change-ups to keep you interested. Here’s to hoping we hear from both bands again in the near future.