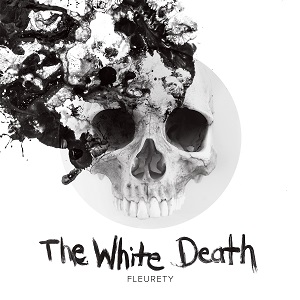 Always thought Department of Apocalyptic Affairs was one of the cleverer album titles in metal history; a bit surprised no one from Hollywood, as they are wont to do, hasn’t nicked the title for one of its high-budget, sure-to-flop buddy action films. That’s the way it is with Norway’s Fluerety, one of the country’s more frank and obvious avant-garde metal bands. Always a step ahead, but maybe too far ahead, meaning they’re so far out there that it’s possible no one ever quite gets them, something that continues with The White Death, their first studio full-length in 17 years.

Quite the tangle of discordant riffs and rhythms, some of which could classify as black metal if we’re feeling over-the-top. The opening title track, with its Norwegian, practically “true” plunge into darkness, is complemented by female vocals, thus creating the album’s first outward serve-and-volley. Even as vocalist/drummer Svein Egil Hatlevik and his co-conspirator Alexander Nordgaren become immersed in quick songwriting tangents, you never quite know what to latch on to, whether on “Lament of the Optimist” or the cleverly-titled “The Science of Normality.”

There are no proper words or descriptors for a band like Fleurety, who have been floating around the Norwegian metal scene since its ’90s heyday. Would be curious to find out how the hardline black metallers felt about these guys; if they embraced them, or rather, found them to be too off-putting and closed off. Methinks they were embraced as the real avant-garde innovators they are, a band who will never get within reach of mass acceptance, but are perfectly content, even happy with how the chips fell for them.