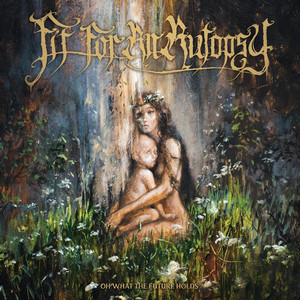 After delivering one of the best albums of the past decade two years ago with The Sea of Tragic Beasts, of course the expectations are high for Fit for an Autopsy’s follow-up.  Oh What the Future Holds doesn’t exactly go down the same directions as its predecessor, often veering into darker and heavier waters, but it holds its own as a release from an act that continues to reinvent itself with each new release.  It’s hooky and immediate, but it also offers quite a bit of range to dive deep into with subsequent listens.

Continuing to expand upon the band’s sound, which at this point is a tough act to really nail, Oh What the Future Holds strengthens Fit for an Autopsy’s resolve to go into interesting territory.  With the band long jettisoning the more streamlined deathcore approach, it’s one of those albums that is easier to describe track by track than to simply toss a label (or labels) at.  On the heavier end of the spectrum, the galloping and near melodeath-inspired riffing of “Pandora” is sure to grab your interest initially.  Complete with a chorus sure to stick firmly in your head for days, it swerves into a monstrous breakdown later in the track to give it some extra teeth.  “A Higher Level of Hate” begins with some tribal-esque drumming before drifting into some almost Meshuggah-like groovy riffs that immediately stand out and are insidiously catchy while delivering a heavy-as-nails feel.  Then there’s the merger of more hardcore elements with furious death metal in “Conditional Healing,” but if that’s not enough, the dark atmosphere behind the driving riffs gives the late track an almost brooding and otherworldly feeling at times to contrast it’s more violent side.

What makes the last few Fit for an Autopsy albums really impactful though, is that they incorporate oodles of melody without it completely watering down their aggressive formula.  Early single “Far from Heaven” feels the most akin to their work on The Sea of Tragic Beasts, with eerie clean vocals and ambience working well off of more throttling and visceral riffs and pounding drums.  “Collateral Damage” keeps things heavy for the most part, with some technical riffing and chugging grooves in collision with each other, but things really open up in the middle of the track with some beautiful and agonizing melodies.  A stark contrast that pays dividends for the track.  But the crown jewel of the album has to be closer, “The Man I Was Not.”  This track really seems to embody everything that Fit for an Autopsy has done with their more recent material and wraps it into a beautiful but menacing package.  A dreamy and quiet opening leads into heavier and more overwhelmingly melancholic but rumbling grooves and chugs with a poignant melodic undercurrent.  It’s a breathtaking closer, and one that should justly turn a few heads in how it finishes out the album.

Oh What the Future Holds solidifies Fit for an Autopsy as one of metal’s more intriguing properties in the way they continue to grow and evolve.  There are few in the more extreme community that can put together a release that hits as violently, yet has so much of a more intimate and personal side to it.  Not to mention a unique personality that stands far apart from many other acts in the genre.