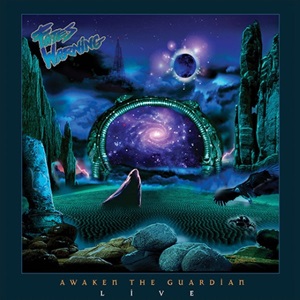 Metal historians remember childhood favorites, etching iconic, page turning albums deep in the hopes that somehow, someway they can relive and possibly experience specific lineups at a reunion show or two down the line. Given John Arch’s return through a solo EP in 2003 plus the Arch/Matheos project in 2011, and his propensity to show up at local Fates Warning shows in the CT area, the possibility of festival appearances swirled about and finally took shape in 2016 – thus we have Awaken the Guardian Live. This DVD/CD set consists of two festival shows- one at Keep It True in Germany from April and the other at Progpower USA in Atlanta, GA in September, both identical in terms of set lists featuring the celebration of the 30th anniversary release for the third studio album in its entirety plus four supplemental favorites off the first two Arch-era Fates albums.

Audience ecstasy makes each set exhilarating. John Arch possesses one of the richest metal ranges in the scene – jaws drop to the floor as he’s able to ascend the highest reaches during “Fata Morgana” and “Guardian” as if time stood still. Fates Warning musically were pushing their abilities to another level for progressive metal – as “Prelude to Ruin” and “Exodus” showcased a driving, shifting nature beyond their early Maiden-esque affinities – moody and still heavy, intertwining a love of European and American styles. Complex riffing and time signature changes abound, with John Arch carefully developing his fantasy-oriented and symbolic lyrics to match the proceedings. It’s always killer to take a peak back in time and engage with classics like “The Apparition” and “Damnation”, with many in the audience who may have never been born when these studio versions originally hit the streets.

Professional film crews capture both sets with the viewer at home in mind – wide shots and close-ups moving back and forth but not in too dizzying of a manner. The only major difference to these ears between the two shows comes in the form of Steve Zimmerman’s snare tone at ProgPower USA has more of a ‘ring’ to it than the Keep It True sound – the band turning in a fine, technically sharp performance both times out. While it appears to close one chapter for this legendary band, this is an outstanding document for 80’s metal fans to catch up on the magic of early Fates Warning.