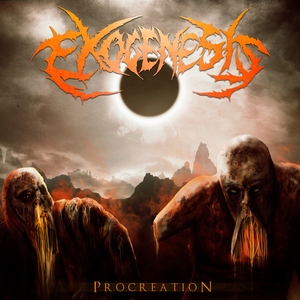 If there’s one thing to be said for Exogenesis’ Procreation, it’s certainly pissed off. Sometimes an album simply reeks of anger, and Exogenesis nail that emotion quite well with their debut EP. While it’s completely and thoroughly one dimensional in its search for the heaviest groove possible, you just can’t shake away the level of charm it produces.

In getting the most potentially polarizing part out of the way first, Exogenesis has a way heavy guitar tone. In other words, there’s some definite nu-metal leanings in terms of tone, and it’s done with a similar feeling of say Sepultura’s Roots or early Soulfly. But in terms of overall aggression, it leans into a cross between hardcore (think Hatebreed) and even some groove metal (as if it wasn’t implied already) and deathcore (no need to worry about excessive breakdowns though). So it’s really a vehicle solely driven by fury, but they take all of the above parts strengths and avoid the weaknesses well. The songs are no-frills and follow a straight-forward approach of hitting as much thick groove as possible (with some melodic touches – see “Meet the Eraser”). At 2-3 minutes in length per track, it’s a pretty streamlined approach as well. No solos to distract, but nor are there any clean vocals to dilute the mixture.

Some may call Procreation a bit simplistic, but it does everything that’s necessary with charisma and sonic violence. We’ll stick with ‘focused’ instead from our perspective – it hits the same sweet spot as more effective brutal death metal bands or more old school hardcore. Plus, the grooves are abrasive enough to peel the paint off your walls.