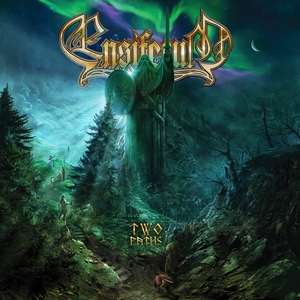 Those hip to the folk metal scene surely don’t need much of an introduction when it comes to Ensiferum. Two Paths being their seventh album (and second for Metal Blade), they are viewed as one of the more consistent and high quality acts within the genre. While Two Paths does little to up the ante, so to speak, it’s a strong and highly polished effort that exudes their strengths.

This far into the game, it’s more about tightening what works than introducing new elements into the Ensiferum sound. So Two Paths accomplishes exactly what it sets out to do. Their second time around recording analog, it does boast one of the album’s biggest strengths. Folk music is made for the live setting, and Two Paths has that sound that feels like a call to arms (just try the triumphant “King of Storms”) and is quite organic. You get the impression that it was just as jovial to record as it will be once the band starts hitting the road to support it. That being said, a good many of these tracks feel strong enough to become live staples. From the shout-along friendly anthem of “For Those About to Fight for Metal” to the hyper-melodic and tavern-esque verses of “Don’t You Say” to the heavier, melodeath-y gleam of “Hail to the Victor,” there’s a good spread of variety, even if it is in a familiar setting. Pick of the litter though, seems to be the galloping and cheery romp that is “Way of the Warrior,” which merges the band’s more epic melodies with some rather catchy riffing.

Some might be quick to shout “more of the same,” but there’s no denying the effectiveness of Two Paths as a whole. Ensiferum have just the right amount of brute metal thunder that mixes with their more fun side, which makes it quite the addictive listen. A hard to refuse combo if you enjoy the folk metal sound.