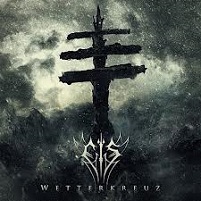 Wind blowing across what is no doubt frozen tundra…sounds like a sure-fire atmospheric black metal album. The only thing missing was the sound of boots trudging through the snow, so maybe Germany’s Eis hadn’t gotten their winter footwear out of the closet in time for the recording of their third album, Wetterkreuz. The band used to go under the Geist moniker, but thanks to the threat of legal action from the Chicago band of the same name, Eis was given the nod, but the same approach to European black metal is still applied.

A rather obvious combination of modern Moonsorrow and Garm-era Borknagar, Eis are hampered by not only the proliferation of recycled ideas, but songs that fail at becoming epics within epics. By that, we’re referring to Moonsorrow’s ability to take really freakin’ long songs and unfurl several momentous moments as they go along, complete with interludes, crescendos, and anything else in the epic metal pantheon. On the flipside with Eis, there’s little in terms of rugged, frost-bitten dynamics, just a regular churn of blackened riffs (“Mann aus Stein”) and barbaric blasting on the title track.

Generally, the metal press tends to swoon over albums like Wetterkreuz in part, because they are the kind of soulside journey that hurdles past the boundaries of conventional black metal, while staying in line with all things epic. However, Eis don’t do a very good job at capitalizing upon a formula that for many, comes almost too easily.