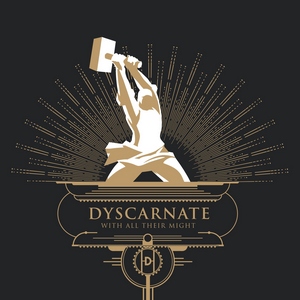 Meat & potatoes. A term that’s often used to describe something that’s the bare bones minimum, or something that’s kind of plain. But on the other hand, it’s got all the essentials for those who are looking for something that’s not going to be too far out there. Something that understands the basics and can pull them off without fail. Dyscarnate exceed at this quality on With All Their Might.

Not a slag on the band at all, but Dyscarnate is able to streamline everything you would want in a modern death metal approach. The songs are all punchy and full of both wicked groove and some insidious melodies. There’s not one in the mix that wouldn’t qualify by definition of being a ‘banger.’ It’s brutal, it’s effective, and it doesn’t beat you over the head with 50 different riffs and tempo changes. Rather, it puts it all on the line with catchy (in a death metal sense) songwriting. Enough venom to draw in the brutal fanbase, but melodic enough that you don’t feel like it’s one big sonic blur. The finale track, “Nothing Seems Right” even takes it one step farther with a near 8-minute length with a proper mood-setting opening (and outro). Plus, the riffs are beefy to say the least. The modern production gives it that Aborted level of bludgeoning when they go in for the groove with full force (“This is Fire!”). One might bemoan the lack of soloing, but again, they keep things tight and moving.

The essence of no-frills death metal, Dyscarnate might not play the most complex music but they do with shining efficiency and plenty of lethal force. The type of thing that must drive people wild in the live setting with all of its energy.