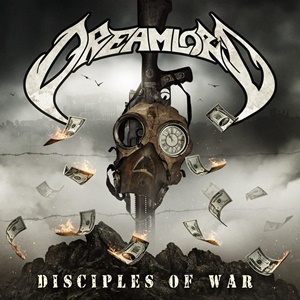 Founded in 1995, Greek thrash act Dreamlord achieved cult status in the underground through a series of demos before having to take a self-imposed hiatus in 2001-03. Returning to the scene they’ve gone through numerous lineup changes, finally reaching the point of this full-length release for Disciples of War. The quartet incorporate a bevy of familiar influences from the American and German side of things – imposing their ferocious attacking nature that has a rhythmic foundation that can be power-oriented in spots, assuring massive headbanging / windmill antics as these ten tracks travel through your body.

Many segments for Dreamlord’s foundation of style certainly come from a bygone-era of thrash – stop/start riff mechanics, longer lead break segments featuring plenty of tapping and energetic speed notations, and potent / barking vocals that demand your attention along with the proper gang background supplementation for all the key parts. The mid-tempo guitar melodies creep up on you which along with the slower fills that open “The 11th Hour” lurk in that “The Thing That Should Not Be”/Metallica land, although there are cultural sequences that build out into Iced Earth horizons, while vocally guitarist Babis Paleogiorgos spews his words from a Morgana Lefay meets Sacred Reich-ish manner. The songs are very tight, even giving proper dynamic interplay where bassist Christos Peveretos provides the necessary groove pull for the twin salvo of “Humanity Enslaved” and “Aggressive Denial” as Babis and fellow lead guitarist Yiannis Glykiotis sprinkle in those twin harmonies and shred-tastic, captivating moments. Later on in the record the traditional nuances come out in spots – Accept/Iron Maiden factor into the bouncy riffs and interesting doom/epic transitions for the six-minute plus instrumental “Act of God”, while “Uncompromised” also features some old school licks and tricks against the uppity crunch and thrash base.

The spoken word/ backwards masking intro to “Out for Blood” is also a nice throwback touch – you can tell though Dreamlord haven’t necessarily progressed much beyond say 1989 when it comes to their outlook and songwriting for Disciples of War. If willing to prepare yourself for that time warp aspect into the heydays of Slayer, Metallica, and Kreator, this is an enjoyable effort filled with solid musicianship and loads of memorable melodic moments.